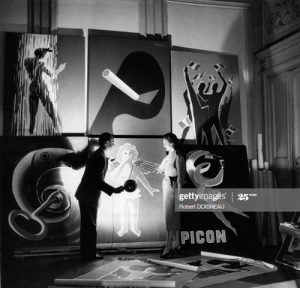 After studying at the Académie Julian and then the Ecole Paule Colin, Bernard Villemot created his first poster in 1933 for the film Dans les rues by Victor Trivas. In the post-war years his career took off and he had more and more contacts with the most prestigious advertisers : Orangina, Perrier, EDF, SNCF, Gillette, Vespa, Bally, Air France etc. Impeccably constructed and thought-out, his creations are invariably powerful and striking.

Posters on the theme of “The Mountain”