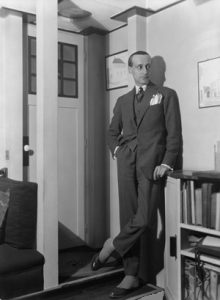 Robert Mallet-Stevens began his career as an architect in 1907.Marked by the Vienna Secession, he worked in a large number of fields: for industry and trade, he designed shop-windows and stores. He also produced the sets of a good twenty films including Marcel L’Herbier’s and . The international exhibition of decorative arts and modern industries in 1925 placed Mallet-Stevens in the limelight: the architect designed several pavilions and layouts which were striking for their modernity. The cubist square created by the Martel brothers caused a scandal. In 1927-1928, the town of Saint-Jean-de-Luz entrusted him with the design of the La Pergola casino.

Posters on the theme “Tourism and Railways”