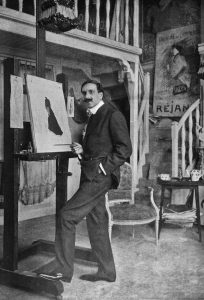 Leonetto Cappiello moved from Italy to Paris in 1898. He then started a brilliant career as a caricaturist that naturally led him towards posters. His first simple, colourful posters were already original enough for passers-by to feel their visual power. In 1904, with Klaus chocolate, he overturned all the established rules: his lady rider in a green dress on her red horse threw out any idea of realism. By thus breaking with the rules established by Jules Chéret, the uncontested master of posters, he established a definition of the modern poster: a shocking, effective and joyful image, as a visual stimulant par excellence. Cappiello thus began a long series which he would continue after the war.