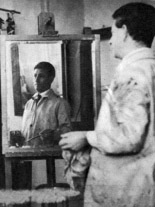 After arriving from Budapest, Róbert Berény studied in Paris from 1905 to 1907 at the Académie Julian. In 1906, he exhibited at the Salon d’Automne and in 1907-1908 at the Salon des Indépendants alongside the Fauves. After returning to Hungary, he became one of the founders of The Eight, the mid-war Hungarian avant-garde. During the 1930s, Berény specialised in the creation of posters for various advertisers such as Modiano, an Italian brand of cigarettes.