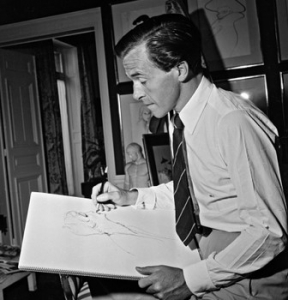 At an early age, René Gruau, who came from Rimini in Italy, met the young editor-in chief of the Milanese fashion magazine Lidel, who directed him towards fashion design. In 1928, he moved to Paris, the world’s fashion capital. In 1935, he worked regularly with and became associated with such young creators as Pierre Balmain, Jacques Fath and above all Christian Dior, who was to revolutionise haute couture with his New Look. As the uncontested star of such great fashion magazines as , etc, he was also passionate about advertising. He has left behind a unique body of work which can be summed up by a single word: elegance.